The technology underlying digital currency, also known as cryptocurrency, has been hailed as revolutionary by some and scary by others.

Blockchain isn’t just about digital currency; it’s the potential future of money and data transfers, and everyone from tech gurus to bankers are paying attention.

But what exactly is blockchain technology?

And how can it be used in our day-to-day lives?

Read on for an in-depth guide to everything you need to know about blockchain technology, including ways it could benefit us all. 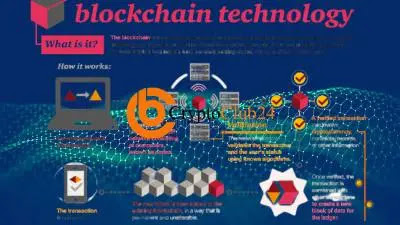 The blockchain technology is a digital, decentralized, public ledger of all cryptocurrency transactions.

It keeps a permanent record of each transaction that takes place in chronological order and stores it on every computer on the network.

This means that no individual has control over it which makes it immune to outside interference or manipulation.

The blockchain is run by a peer-to-peer network which collectively adheres to a protocol for validating new blocks.

Once recorded, data cannot be altered retroactively without alteration of all subsequent blocks and consensus of the network majority.

Blockchain technology uses a distributed ledger, which can be described as an immutable and transparent database.

The blockchain has no central server or administrator, but instead offers a peer-to-peer network of replicated databases.

To update the chain, participants on the network race to add new blocks to the end of the chain in order to create new updates.

The replication and distribution of data across different nodes, as well as its immutability, means that hacking and fraud are very unlikely.

In contrast with other online transactions that require third-party validation before trust is established, every participant in a blockchain transaction will have all information needed to verify it instantly without requiring any additional verification from other parties on the network.

What are blockchain technologies?

Blockchain technologies are a relatively new innovation that was originally created to serve as the public ledger of all Bitcoin transactions.

The technology quickly evolved to be used in other sectors such as finance, health care, and real estate.

As use cases continued to grow, blockchain technologies became widely recognized as one of the most disruptive innovations in recent history.

With the introduction of new protocols such as Ethereum, there are now more than 1,000 projects working on various applications of blockchain technology.

One thing to keep in mind is that these types of solutions will only work when there’s a network large enough to support them. For instance:

Bitcoin’s network has only recently become large enough to support significant commerce because its developer community has been steadily growing over time with an increase in adoption from vendors who wanted to accept it as payment option for their goods or services.

it is blockchain technology and how does it work?

A blockchain is a shared database that stores information in an immutable, decentralized way.

The key word here is shared. With blockchain technology, information isn’t stored on just one computer it can be copied and shared across a network of computers, making it difficult to hack or tamper with data.

The first time someone tries to change some data, they have to use so much computing power that it becomes practically impossible to make any changes without being noticed by others on the network. That means blockchain transactions are permanent and secure by design.

This structure also makes blockchains virtually impossible to corrupt as they store blocks of records that are mathematically tied together and secured using cryptography.

What is blockchain technology with example?

Blockchain technology is a digital and decentralized ledger of economic transactions. It can be accessed by anyone on a computer anywhere in the world.

The ledger contains information about each transaction between two people, which are stored in 'blocks'.

Each block contains information about who was involved in that transaction, when it happened and how much was traded. This means that blockchain technology makes it possible to track these transactions without having to rely on a third party like a bank or government agency.

If one person initiates a transaction, everyone else connected to that network can see what's happening instantly and verify the legitimacy of their transaction.

No one can make changes to any information on the blockchain without breaking this record of all previous transactions on that chain.

What are the 4 different types of blockchain technology?

What is the main purpose of blockchain?

Essentially, blockchain technology creates a digital and decentralized public ledger of transactions. This means that it is not controlled by any one entity and cannot be altered in any way.

Blockchain technology first emerged as the underlying enabling technology behind Bitcoin when its creator Satoshi Nakamoto created it as a public transaction ledger in 2008.

Since then, other uses have emerged with different implementations of this technology.

The main purpose of blockchain technology is to provide security through decentralization and transparency.

By providing a secure platform that cannot be hacked or changed without consensus from all parties involved, it ensures trust between parties who may not know each other or have established trust yet.

Blockchain technology, blockchain, or just the blockchain as it is known to the masses, is a decentralized and distributed digital ledger that records transactions.

It stores data in blocks that are connected to one another in sequential chains. To understand how this works, think of a spreadsheet.

When you make a change to one cell in your spreadsheet, every other cell on your spreadsheet will reflect the change you made. That's because every cell has its own column and row reference.

In a blockchain, every block has its own unique identifier based off of its position within the chain and also contains data about previous blocks.

This post is designed to be accessible, so I won't get into too much detail about what a blockchain actually does. I want to talk about how it does that, and why we should all care.

I'll also go through some of the basics of how blockchains work and how you can use them in your own life.

But don't worry if you don't know what any of this means yet- we'll start with absolute basics and build up from there.