A blockchain developer builds decentralized ledger technology for all sorts of applications, from cryptocurrencies to medical records to voting and beyond. As an increasing number of industries experiment with the technology that underlies Bitcoin, blockchain developers are suddenly in demand as never before, making this one of the most promising job markets in today’s economy.

But what exactly do they do?

How can you become one?

And how can you ensure that your business doesn’t get left behind by this rapidly advancing trend? Let’s find out! 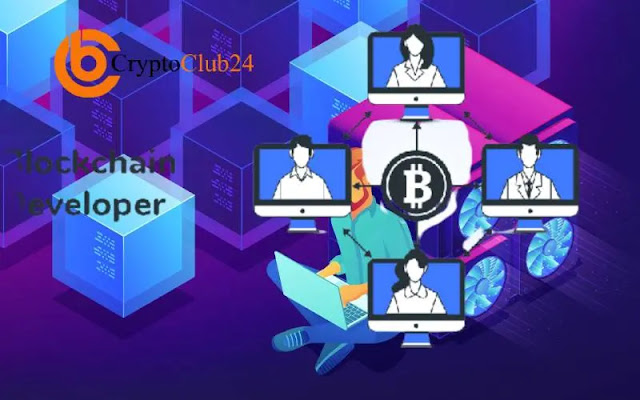 A blockchain developer is someone who creates, maintains, and upgrades the software that enables transactions on the blockchain.

Blockchain developers typically have at least one of these skills: coding in languages like Solidity, Python, or Go; developing smart contract logic; or developing new applications that interact with the blockchain.

They work closely with other members of the team to come up with solutions to problems as they arise. If you're interested in becoming a blockchain developer, it's best to get involved with open-source projects related to blockchain development and read books about programming. In order to be an effective blockchain developer, you'll need an understanding of cryptography (hashing algorithms) which are needed for mining cryptocurrency.

What does a blockchain developer do?

Blockchain developers are in charge of creating, maintaining, and auditing new blockchains. They are also responsible for ensuring that the nodes on their network agree on the same set of transactions.

This means that they need to have an understanding of consensus algorithms like Proof-of-Work or Proof-of-Stake. Beyond this, they will need to be able to code in at least one programming language like C++ or Python. They will also need to understand cryptography principles including hashing and encryption.

Blockchain developers use their skills to create innovative applications. They are skilled at understanding cryptography, data security, and coding languages like C++.

They also need to be able to understand computer science fundamentals. Blockchain developers are primarily employed by major companies like IBM, which has about 10 000 employees in the technology sector in India alone.

A large number of these employees work on blockchain projects for the company. This includes both research and development as well as product teams that focus on commercializing the results of their research.

What is needed to be a blockchain developer?

The first step to becoming a blockchain developer is to learn the basics of coding. You need to know how to code in at least one programming language, preferably Python or JavaScript.

Your next step will be learning about cryptography and encryption, which are used heavily in blockchain technology. It's also recommended that you learn about data structures and design patterns because these are important components of developing software with blockchains.

If you're working in the Bitcoin space, you'll need to master Go programming language as well as an SQL database like MySQL or PostgreSQL because these are crucial for storing your data on the Bitcoin network. Finally, it's important that you have experience working with relational databases so that you can develop your skills from there.

Blockchain developers are highly sought after in the modern era of business. They are responsible for building, maintaining and upgrading blockchain networks. They work with companies to create different applications for them on a variety of platforms.

A blockchain developer needs to have an extensive knowledge of the internet and programming languages such as Python or Ruby on Rails. They also need to be up-to-date with their skillsets by attending workshops that are relevant to new trends in the industry.

Blockchain developers write code for the software that will run on nodes across the network. They need to be experts in areas like cryptography, distributed computing, databases, and scalable systems.

If you want to become a blockchain developer, it's important to have some expertise in these fields as well as solid programming skills. There are also different types of blockchain developers. Some specialize in developing the actual technology while others might focus on business applications or regulatory compliance.

What is the salary of blockchain developer?

These smart contracts allow for transactions to be made without an intermediary, such as a bank or other financial institution. Without these intermediaries, transaction fees can be minimized.

Blockchain technology is still in its early stages and the majority of DApps use Ethereum's blockchain because it supports Turing-complete languages which make programming for it easier. As such, Ethereum's price has skyrocketed since 2016 when it was trading at $10-$15 per coin. Currently, Ethereum trades at $100+ per token with a market cap of over $28 billion USD.

How To Become A Blockchain Developer

Blockchain developers are the people who develop a blockchain's software. Blockchain technology can be used for several different applications, ranging from the financial sector to supply chain management.

There is no one typical day in the life of a blockchain developer, as the work can vary depending on the project they are working on. However, there are some things that you need to be able to do in order to qualify for this position. For example, you must have deep knowledge of cryptography and data structures, as well as coding languages like C++ or Java. You also need to know how to write smart contracts using various programming languages like Solidity or Python.

How Much Do Blockchain Developers Make?

Blockchain Architects - These people plan out the structure of an app before coding begins. They make decisions about how data flows through the system and its security protocols, for example.

Blockchain Coders - These people build on top of the plans that architects have created by writing code to bring them to life. For example, they might work on creating a smart contract that monitors energy consumption in real-time by using sensors placed at different points throughout a building's infrastructure.